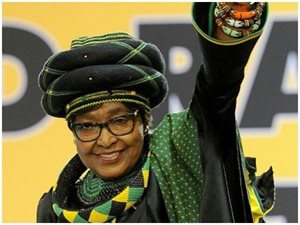 Winnie Madikizela-Mandela was born in 1936 in South Africa. Her father was a local history teacher who later worked for the local government. Her mother taught science. Winnie was one of nine siblings. When she was 9 years old, she had an experience that would influence her trajectory in life. World War II had ended, and there was to be a celebration in her town. When she and her family arrived, they were not permitted to enter because the event was for Whites only. This opened her eyes to the injustices in her society. She had more similar experiences in her childhood and youth, and they left an imprint on her.

Winnie excelled in school, permitting her to continue her studies, which was not an option for all Black children. She began to develop leadership skills in high school, and after graduation in 1953 she was accepted at the Jan Hofmeyr School of Social Work in Johannesburg. While studying in Johannesburg she experienced the full effects of apartheid and began to visit the famous Black township of Soweto.

Winnie finished her social work studies in 1955. Because she did so well, she was awarded a scholarship to study in the United States, but she ultimately decided to stay in South Africa to work as a social worker in Baragwanath Hospital. She was the first Black person to hold such a position. Winnie became engaged in political activism and research about issues of social justice. She used her social work skills and knowledge to look at infant mortality rates in the townships.

She married Nelson Mandela in 1958, and they moved to Soweto to live and work. Nelson continued his work with the African National Congress (ANC), and Winnie continued her activism as well. Their home was a gathering place for antiapartheid work and also the target of frequent police raids because of that work.

Winnie was arrested in October 1958 because of her activism work and participation in a protest. The protest was against a law that required Black people to always carry papers, which restricted their movements and helped monitor their activities. Winnie  spent 2 weeks in jail. While there she learned of the horrific conditions of the jails in South Africa, which strengthened her commitment to be an agent of change. She lost her job soon after because she had become nationally recognized as a leader in the antiapartheid movement. As her activism increased, her social circles were continuously infiltrated by government spies.

Winnie gave birth to two children between 1958 and 1960, during a time when Nelson was in and out of prison. Nelson was found innocent but was forced into hiding and so was no longer participating in the home. He and Winnie had to meet clandestinely. In August of 1961 Nelson was caught and began his 27-year period of incarceration. Because Winnie was also a leader, the government restricted her movements and did not permit her to be quoted in the media. She continued to be watched by the police, and her home continued to be raided. The authorities went so far as to have schools expel her children because of her political activities.

During this time, she described

that midnight knock when all about you is quiet. It means those blinding torches shone simultaneously through every window of your house before the door is kicked open. It means the exclusive right the security branch have to read each and every letter in the house. It means paging through each and every book on your shelves, lifting carpets, looking under beds, lifting sleeping children from mattresses and looking under the sheets. It means tasting your sugar, your mealie meal and every spice on your kitchen shelf. Unpacking all your clothing and going through each pocket. Ultimately it means your seizure at dawn, dragged away from little children screaming and clinging to your skirt, imploring the white man dragging Mummy away to leave her alone. (Bezzdrob, 2003, p. 138)

In 1965 Winnie’s restrictions were tightened and she was not permitted to even leave her neighborhood. She had to leave her social work job because she could not travel. Any job that she was able to acquire was short-lived because her employers were pressured to fire her. She also had a difficult time finding schools for her children and had to send them to Swaziland for education.

Winnie continued her social work as an advocate for political prisoners and was arrested. She was sent to solitary confinement for 17 months under the Terrorism Act that permitted the police to arrest people without a warrant, without an attorney, for an unspecified amount of time. She spent 200 days without any human contact except with the people interrogating her. She was subjected to harsh treatment and was made to witness the torture of others. She was told that if she did not turn people in, more people would be tortured because of her. This broke her spirit.

She was released from jail but once again banned from travel, which made visiting Nelson on Robben Island very difficult. Her house was raided as frequently as four times per day, and it was bombed. Her struggles and commitment made her a respected figure to young people fighting against apartheid.

Winnie continued her work organizing youths and parents for educational change. She was arrested multiple times and when released was again restricted in her movements. In 1977 she was arrested and sent into internal exile for 8 years. The people of the town where she was sent—Brandfort—were told to avoid her because she was a dangerous terrorist. But she was undaunted. She continued her work from afar and continued to be held in high regard. In Brandfort she started a soup kitchen, community garden, local health committee, and other service organizations.

Back in Johannesburg in 1986 she continued her work with the most vulnerable, particularly young people.

Her life was not without its ups and down. Winnie’s frequent arrests, her banishment, and the harsh interrogations took a toll on her mental health and her worldview. She became much more militant in her work to end apartheid. People accused her of supporting the practice of necklacing  , a form of torture leading to severe burns and often death. An organization that she founded and supported was accused of kidnapping young people who opposed it.

In 1990 Nelson was released from jail. The couple had the charisma of celebrities as they traveled giving speeches and meeting people. She was appointed the head of social welfare for the ANC at this time. At the same time, she was held for trial for the killing of a kidnapped youth. She eventually received a punishment of 2 years suspended sentence. She continued her work in social welfare, but she began to be marginalized from the center of the work. She was accused of financial irregularities. She and Nelson grew apart and separated in 1992 and divorced in 1996.

Winnie was brought before South Africa’s Truth and Reconciliation Committee, where Archbishop Desmond Tutu begged her to admit to mistakes that she had made. She made the admission, and she apologized to those who were negatively affected by any decisions she made or any organizations that she began.

Winnie continued to advocate for causes important to her, such as the rights of people with HIV. But Winnie mostly retreated from public view until her death in 2016.