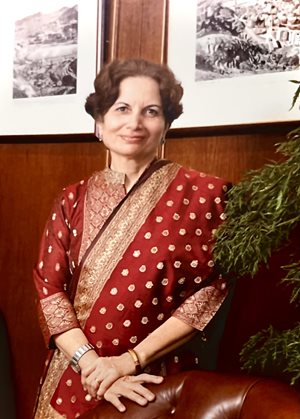 Although small in stature, Vimla Nadkarni (née Lala) was a giant in shaping both Indian and global social work. Professor Nadkarni is well-known internationally for her work as President of the International Association of Schools of Social Work (IASSW) from 2012–2016, although she was active in many areas of international social work and served on numerous international projects, editorial, and advisory boards. She headed the Department of Medical and Psychiatric Social Work and was the Founding Dean of the School of Social Work at the Tata Institute of Social Sciences (TISS) in Mumbai, India, from which she retired in 2013 after 42 years of service. Professor Nadkarni died 20 November 2021.

Vimla was born into a large family in South Bombay,* and took a Bachelor of Arts (with Honours in Psychology) at St. Xavier’s College (University of Bombay) in 1969, a Master’s of Arts in Social Work at from TISS (with Honours, with a Specialisation in Medical and Psychiatric Social Work) in 1971, and a Bachelor of General Law from Kishinchand Chllaram Law College (University of Bombay) in 1976. Under the guidance of Armaity S. Desai at the TISS, Vimla submitted her PhD thesis, Intervention in issues of pollution using integrated social work practice, (http://hdl.handle.net/10603/22229) in 1991 and was awarded her PhD in 1996. (Desai herself was awarded the Katherine Kendall Award of the International Association of Schools of Social Work in 1992.) Vimla married journalist Vithal C. Nadkarni in 1977; their daughter lives and works in the United States.

Professor Nadkarni was motivated throughout her life by feminism, a passion for human rights and human dignity, and a drive to elevate the quality of social work education and practice. She served as the Secretary General of the Family Planning Association of India (2001–2002), President of the Bombay Association of Trained Social Workers for two terms (1994–1998), and Vice President for two additional terms (2011–2015). Professor Nadkarni was instrumental in establishing the Indian Association of Social Work Education in 2013 and served as Vice-President of the Association of Schools of Social Work in India (ASSWI). She was elected as a Member-at-Large of the Board of Directors of IASSW in 2008, and as President from 2012 to 2016 (https://www.iassw-aiets.org/). Professor Nadkarni was a founding member of the Social Work and Health Inequalities Network (SWHIN; https://blogs.coventry.ac.uk//swhin/). Prof Nadkarni served on the Advisory Board of the Global Institute of Social Work, Singapore (https://www.thegisw.org/); as Honorary Director for the Niramaya Health Foundation, Mumbai (an NGO focused on child and adolescent health); and the Advisory Group for the Mumbai-based Khula Aasman Trust, which uses the arts to engage social change for marginalised communities (https://www.instagram.com/khulaaasmantrust/?hl=en). She remained active throughout her entire life, serving on the Advisory Board for the 9th Social Work Congress of the National Association of Professional Social Workers in India, which was held in October 2021, just a month before her death.

Professor Nadkarni’s international recognitions includes Kellogg (1994) and Fulbright (1995) Fellowships. She was the 2nd Annual Hokenstad International Lecturer (nominated by the Council of Social Work Education) in 2008. She participated in numerous international boards, editorial boards, consultancies, and nearly 100 international, national, and local conferences, seminars, and workshops. She published more than 40 articles and book reviews in refereed journals, and many book chapters. A selected list of publications follows below.

*Note: the name Bombay reverted to Mumbai in November 1995. Names current at the time are used here.


For the full review, references, and additional publications/resources, click here.