Social Work's Role in the Incarceration of Japanese Americans

The United States forcibly removed and incarcerated about 120,000 Japanese Americans during World War II. Social workers were part of every aspect of this program of racial profiling en masse, yet also worked to provide services to these people during their incarceration.

Yoosun Park, PhD, MSW, discusses her scholarship on this topic with Dr. Tanya Smith Brice, CSWE vice president of education. May is Asian American and Pacific Islander Heritage Month and CSWE is eager to present this Critical Conversation this month. 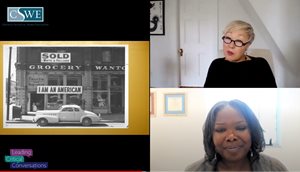 The conversation focuses on the work of the YWCA, whose progressive vision and vocal activism for racial equality was, nevertheless, bound within the fundamentally racist belief that being Japanese and being American were mutually exclusive states. Drs. Park and Smith Brice highlight lessons for today's social workers and social work educators.

"In 1946, the YWCA voted to desegregate the entire organization. I think it's worth sort of thinking about how advanced that was, right? It's important to keep that in mind ... despite this progressive outlook they were blinded by sort of fault lines that they didn't realize about their own racism," said Park.

CSWE also makes it possible to share thoughts and research on anti-Asian racism and a host of other topics on CSWE Spark. Click here to join those discussions and sign up for your free Spark account.