The report, The Social Work Profession: Findings from Three Years of Surveys of New Social Workers, presents details on where and how new social workers are serving clients and communities across the country. However, a key finding is that the costs to become a social worker are higher for Black students than White students.

“While we are encouraged to see the strong diversity of race and ethnicity of students graduating with MSW degrees, the difference in costs between students who are White and Black is concerning,” said CSWE President and CEO Darla Spence Coffey, PhD, MSW. “Nearly half of new social workers were the first ones in their family to graduate from college. We must do all that we can to reduce the disparate costs for social work students because we need to sustain this growing diverse population of care providers.”

The research was completed in partnership with the National Association of Social Workers and the George Washington University Fitzhugh Mullan Institute for Health Workforce Equity.

Among the many findings in the report, it is clear that social work is an in-demand profession with strong job satisfaction levels that could be higher with increased salaries. Highlighted below are insights into new social workers’ demographic and educational backgrounds, the types of jobs they are taking, the populations they are serving, their experiences in the job market, and more.

The 2019 survey introduced new questions on student educational debt. School-based scholarships (31.8%) and family support (32.1%) were the most common types of funding for graduates, although most respondents (33.6%) reported receiving no financial support at all. Government sources of support were less common; more than 11% of respondents received some form of support from government programs. 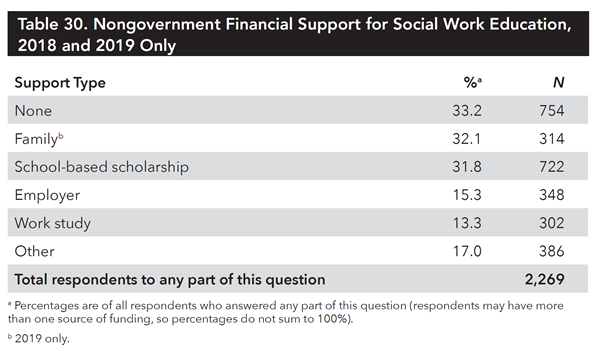 Despite a variety of funding sources for MSW students, their educational debt at graduation was substantial. Among the 2019 graduates the mean educational debt was $66,000, of which $49,000 was from their social work education.

The majority of new graduates were working by the September after spring graduation. More than four of five respondents employed in social work or social work-related positions were in direct (or clinical) practice with individuals, families, or groups (82%).

In terms of populations served, more than one-third of new social workers were serving children and families (34.9%). The second most common practice focus was people with mental health disorders, cited by more than a quarter of respondents (25.9%). 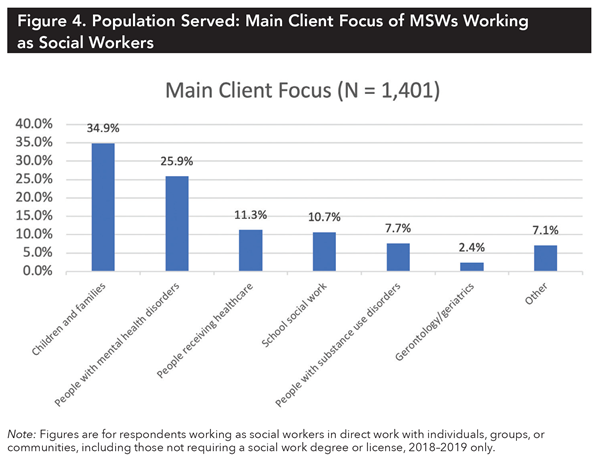 The Social Work Profession: Findings from Three Years of Surveys of New Social Workers, is available for download.

The 2019 Social Work Workforce Study was supported through funding from the Council on Social Work Education, the National Association of Social Workers, and the following social work programs:

About the Council on Social Work Education