The Council on Social Work Education (CSWE) is committed to achieving social justice and equity for Indigenous Peoples in ways that respect their ancient cultures and sovereign rights and that address a legacy of colonization and oppression. Social work education strives to prepare tomorrow’s practitioners to effect social change for all people. With humility, we recognize and respect all Indigenous Peoples and their ties to the land.

The purpose of the social work profession is to promote human and community well-being and yet there is no doubt that social workers have also functioned as agents of social control in upholding colonial and racist norms and encouraging clients to assimilate to the larger American culture. 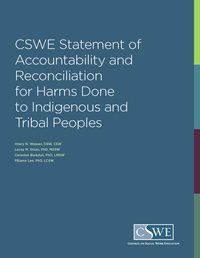 On June 25, 2021, the Council on Social Work Education (CSWE) Board of Directors humbly endorsed this statement which was drafted by the Indigenous and Tribal Social Work Educators (ITSWEA) as a partial account of social work education’s role in harms committed against Indigenous and Tribal Peoples and as an apology for those harms. This statement was created by educators for educators to be used as a resource in social justice, racial inequities, and social work curriculums. Download the statement here or by clicking the report cover.

CSWE, the Indigenous and Tribal Social Work Educators Association, and the Commission on Diversity and Social & Economic Justice have collaborated on this Land Acknowledgment Statement to raise awareness of the global truth and reconciliation movement addressing historical and systemic issues of Indiegenous Peoples.

In 2007, The CSWE Native American Task Force used multiple methods of data collection, including primary and secondary sources, to arrive at the most comprehensive summary possible of the current state of the social work education field. Existing sources of data included articles and books in the social work literature, government sources, materials and publications from the CSWE archives, and data from CSWE and the Minority Fellowship Program. Beyond these existing sources, additional data was collected for this study through surveys, focus groups, interviews, and text analysis. Download the study.

A Reflection on the Importance of Land Acknowledgment Statements