The goals of the film were listed as "first, to interest more young people in social work as a career and second, to present social work as a profession which calls for graduate education" (CSWE, 1959, p. 1). This statement reflects the idea at the time that preparation for professional social work practice only took place at the graduate level.

Summer of Decision follows intern David Michaels (played by Nicholas Pryor, now known for his roles in Risky Business and numerous TV series) through his work at a New York social services agency, as he considers whether he should pursue social work as a career. 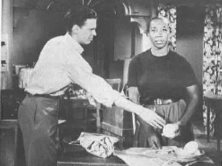 In 1964 CSWE reported that nearly 1 million people had seen Summer of Decision ;in high school, college, and community settings, and the 398 telecasts of the film had reached approximately 15 million viewers.

About the photo: In Summer of Decision (1959), intern David Michaels (played by Nicholas Pryor) helps blind client Mrs. Benson (played by Vinnette Carroll) in her move to a new apartment.