July 2021 Educator|Resource of the Month 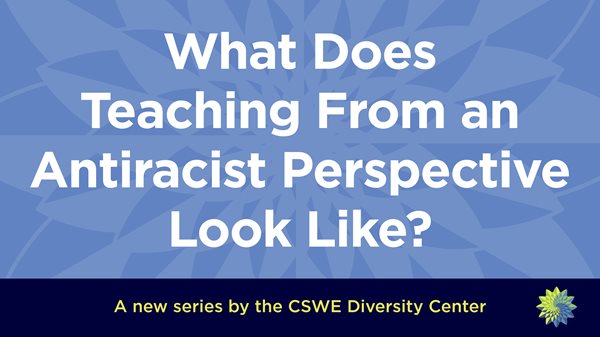 Although teaching from an antiracist perspective is not new to social work educators, we are being introduced to paradigms that, in the words of professor of education Jarvis R. Givens in Fugitive Pedagogy, “move beyond the familiar frames.” Racist practices are the foundation of many of the problems that we intervene with, and our failure to address them can ultimately undermine what we are trying to achieve as social work practitioners. Translating the contemporary discourse into our teaching is not always self-evident. More than about content, teaching from an antiracism perspective is about pedagogy, involving the restructuring of concepts, curriculum, and classroom learning environment. It calls for classrooms where educators and students form a true community of learners. During this period especially, in which many students are concerned that important content on racism is being left out, a restructuring of pedagogy offers the opportunity for students to help shape their learning according to their goals.

The Center for Diversity and Social & Economic Justice announces the series, “What Does Teaching From an Antiracist Perspective Look Like?” Using illustrative examples, the goal is to help demystify confusing terminology, translate concepts into content, and provide useful teaching resources. Through a series of Educator|Resources we will provide fresh and clear introductions to key topics, including the ones below. If you would like to get a head start, see the suggested book(s) for each topic.

A key element of teaching from an antiracism perspective is directly addressing the profession’s own participation in racist actions and the human cost to communities. This extends to collusion between the broader social welfare system and systems that have devastated communities of color, such as the criminal justice system. Actions to restructure systems as well as to redress past injustices must be instituted. What does complicity look like? Learn about the long-standing collusion between social welfare and criminal justice in Halfway Home: Race, Punishment, and the Afterlife of Mass Incarceration and the complicity of social workers in the forced removal and incarceration of Japanese Americans during World War II in Facilitating Injustice.

Teaching based on critical race theory involves examining “policies and practices that are taken for granted to uncover the overt and covert ways that racist ideologies, structures, and institutions create and maintain racial inequality” (Oxford Research Encyclopedia). Critical race theory is not a theory per se but a transdisciplinary conceptual framework involving several basic tenets (e.g., race is a social construction). Learning about its foundations, as described in the essays in Critical Race Theory: The Key Writings That Formed the Movement, helps clarify its purpose and applications to social work education. More than an analytical tool, critical race theory changed the discourse on racial politics—it is considered both an intellectual movement particular to our times and “part of a long tradition of human resistance and liberation” (p. xii).

Decolonization means reclaiming. A decolonized curriculum is one grounded in the identities, histories, worldviews, community structures, and concerns of the communities we serve, as the communities themselves define it. In so doing, it involves a recognition of power structures, including racial politics, that have marginalized certain groups. In Indigenous and Decolonizing Studies in Education: Mapping the Long View, Indigenous scholars delineate the authentic stories of Indigenous communities but also convey the futility of working from false narratives, with significant implications for social work.

Creating an Anti-Oppressive Learning Environment in the Classroom

Teaching from an antiracist perspective requires creating an anti-oppressive learning environment in our classrooms. This entails listening to the students, teaching to what they value, and including learning materials in which they can see themselves—in short, it calls for involving students as co-creators of their education. Doing so engages self-awareness and critical consciousness, relevant in the context of contemporary systems of inequality. Read about how students “develop their power” in Paulo Freire’s classic Pedagogy of the Oppressed, also revealed in the related book on the heritage of Black subversive pedagogy,  Fugitive Pedagogy: Carter G. Woodson and the Art of Black Teaching.